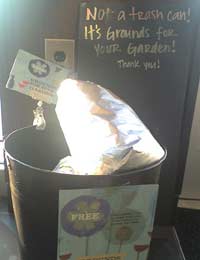 Businesses are keen to cash in on the environmental credentials in a time when going green is seen to be the responsible thing to do. Fast food companies are no exception, with two of the high street major players already aiming for green certification in America which will no doubt be a bonus for their UK branches.

Starbucks has already started to make a name for itself in environmental circles as a total of nine of its stores are LEED-certified. LEED (Leadership in Energy & Environmental Design) is an internationally recognised certification for buildings which shows that a particular building or community has been designed and built to save energy, be water efficient, reduce CO2 emissions, improve indoor environmental quality and more.Starbucks is aiming to get LEED certification for more of its stores, because the brand is committed to reducing its own environmental impact – and also because they admit it makes good business sense to be certified as environmentally friendly! Other environmental innovations in the coffee chain include encouraging customers to use reusable travel mugs instead of the ubiquitous paper cups. They’ve been offering discounts to customers who bring their own travel mugs since as far back as 1985, and are working towards their long-term goal of 100 per cent reusable or recyclable cups by 2015.

Starbucks’ other proud boasts include sourcing Fair trade coffee, monitoring its water use and supporting communities. You can find out more about their environmental policies on the Starbucks website.

Greening up the Golden Arches

The biggest and best known fast food giant in the world really has no excuse to not be implementing green policies – there’s no shortage of money or manpower at McDonalds, after all. If you’re trying reconcile green leanings with a love for the humble burger though, you’ll be pleased to hear that Maccy D’s is also LEED certified – currently just two locations in the US, but it’s a start.

The McDonald’s branch in Chicago was designated as the first green restaurant for McDonald, and it’s estimated that the fast food joint uses 25 percent less energy than a traditional McDonald’s restaurant. This is partly down to the storm water management system and an innovative vegetative green roof – plus all the kitchen equipment is star rated for its energy saving efficiency.

The green fast food emporium in Chicago also recycles milk - and one of the restaurant’s partitions has even been built from Coca-Cola bottles. They, have also introduced designated parking spaces for hybrid vehicles.

The company is looking at the performance of the pilot restaurant to decide which of its green features are easily duplicated by the rest of 31,000 Mcdonalds restaurants across the world. At the moment, the greening of McDonalds is reaching out as far as Canada, France and Brazil.

Subway Not Running Behind on Green Policies

Subway is not far behind in testing the eco waters, with a new eco-store in Florida. It was built using some recycled materials, and the building uses more fuel efficient heating and cooling systems, plumbing systems designed to conserve water and brand new high-efficiency lighting. Subway worked with the U.S. Green Building Council to make sure that the building was as environmentally friendly as possible, and following its success is planning to build more eco-stores.

In the Subway stores all napkins are now 100 per cent recycled materials, which the fast food firm estimates will save about 147,000 trees a year. The company also switched to made of polypropylene cutlery and plastic drinking cups to save 13,000 barrels of oil per year, and plans to save on petrol too.