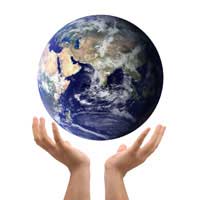 Fast food has become so ingrained in our culture that it’s hard to imagine a world without pre-packaged burgers, ready meals in little cardboard boxes, and mountains of left over packaging in the bin every week for the dustmen. Packaging is indeed a highly lucrative business in itself, and the movement towards recycling does seem to have at least scratched the surface of the problem. But how does the food we eat, in particular fast food, impact on our environment?

You probably wouldn’t think of eating a burger as contributing to your carbon footprint, but in fact pretty much everything we do will contribute towards the amount of resources we use up, and eating a cheeseburger is just one common example of this.

A report published in 2000 by the Stockholm University and the Swiss Federal Institute of Technology described all the elements that go into producing a standard burger, from growing the wheat and making it into the burger buns, to feeding the cattle, their eventual slaughter and even how much of the Earth's energy and resources it takes to pickle cucumbers!

Overall, the researchers came to the conclusion that a single cheeseburger takes up somewhere between about 7 and 20 mega joules in energy. Taking everything else into consideration, this can be converted to a CO2 emission of between 1 and 3.5 kilograms!

That’s not taking into account the methane produced by the cows themselves as they wander around their fields, eating grass and minding their own business. Just one cow can produce about 110 kilos of methane every year in the form of manure and its own delicate ‘emissions’ – so over its lifetime, a beef cow can produce a staggering 220 kilos of methane. So Fast Food’s carbon footprint is beginning to add up considerably!

Not all fast food is in the form of burgers and chips, of course. Ready meals and other prepared foods are also guilty of adding to the world’s considerable carbon footprint. Distributing fast food and other foods in lorries adds to pollution, emissions and congestion, which are all contributing to climate change across the planet.

The amount of food that was transported by road doubled between 1974 and 2005, according to a report from the Department of Environment, Food and Rural Affairs, and that the cost to the environment of moving all this food could be in the region of £9billion a year, with half of this amount being blamed on congestion on the roads.

Interestingly, the report suggested that to avoid adding extra miles to our food by shopping for it ourselves, we can actually cut the carbon cost by shopping online and having the groceries delivered to the door instead...

Another issue close to the heart of environmental campaigners is the packaging used on all foods and not just fast foods. Branding and marketing are all part of the selling strategy of all products these days, ad our food is no exception.

The fast food companies have been under pressure for some time to reduce the amount of packaging they use in their food, and many have tried to rise to the challenge.

Recycling facilities make it easier to dispose of your empty pizza boxes with your conscience intact, and McDonalds has been actively trying to reduce waste by making use of recycled materials in some of its food containers. The traditional polystyrene burger box has been replaced by recyclable cardboard, and many other outlets are doing the same – in order to allay customers concerns about waste and the effects of packaging on the environment.

Some of the bigger chains such as KFC and Burger King have also been attempting to reduce the amount of litter and waste food close to their outlets following a campaign by ‘Keep Britain Tidy’ in 2003. Councils across the country have been cracking down on fast food generated litter and asking fast food outlets to commit to schemes aimed at keeping the streets clean and tidy.

Junk Food in Schools
Share Your Story, Join the Discussion or Seek Advice..
Thanks, this was helpful but I wish there were more statistics and numbers xD I'm doing a report and am looking for good evidence
HiThere - 27-Dec-13 @ 8:04 PM
I have found this page very informative. Keep it up.
McGonagall - 12-Oct-12 @ 4:57 AM
their was hardly any info on this page ps love doc
doc - 9-Aug-12 @ 2:39 AM
Title:
(never shown)
Firstname:
(never shown)
Surname:
(never shown)
Email:
(never shown)
Nickname:
(shown)
Comment:
Validate: