Home > History of Fast Food > Fast Food from Around the World

Fast Food from Around the World 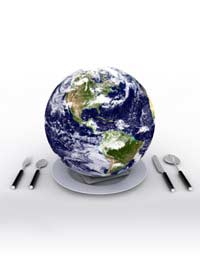 Fast food is something that we usually seem to associate with America and Britain – well, not surprisingly as a 2008 survey revealed that 45% of Brits and 44% of Americans didn’t think they would be able to give up the taste of it!

In fact, fast food is available around the globe, and not always in the same form that we think it might be. For example, Chinese food sold in China will be vastly different to the fast food we will order from a Chinese take away in the UK. The same also applies to Indian cuisine which is nothing like the menu in your average Indian restaurant in the west.

If you look for a snack on the go in India, you’re likely to find street vendors selling delicacies such as:

Until the mid-nineties, fast food outlets in China were few and far between, and the only places you would find fast(er) food were the old traditional Chinese restaurants and vendors selling foods such as:

More recently, Western style fast-food restaurants are springing up, some selling exclusively in Chinese dishes such as California Beef Noodle King, but even this chain prides itself on using only Chinese ingredients.

The most popular fast food that you’ll find in Middle Eastern countries are flatbreads and falafel, which are fried, spiced chickpea (or sometimes fava bean) balls. These are usually sold by street vendors and independent traders. Also a staple of Middle Eastern cuisine is the kebab house. These are very popular, especially in Turkey and the Lebanon. Kebab shops also popular across Europe and the UK.

Across the rest of Europe there are regional preferences and variations in what you might find on the fast food menu. For example, Dutch fast food meal is quite often just a portion of chips (which they call friet or patat) served with sauce and meat of some sort. The Dutch love their chips with mayonnaise, but there’s usually a selection of other condiments that will include ketchup, satay sauce or even piccalilli. Really brave foodies might like to try one of the famous sauce combinations:

The meat served with the chips is often a frikandel (deep fried skinless minced meat sausage), or a kroket (deep fried meat ragout in bread crumbs)

The French like their fast food served in sandwiches, Panini and crepes, and in the winter you can usually also find roasted chestnuts sold on the street for hungry, cold shoppers.

In Germany you’ll find sausages – even curried sausages called ‘currywurst’ served with chips, mayonnaise and ketchup. Beer is also on sale at many street stands to drink with the delicacies. Middle Eastern style food is also popular in Germany – treats such as halloumi and falafel.

Not surprisingly, the most popular Italian fast food tends to be pizza, which is sold all over the country in takeaways and street stands. There are some regional delicacies that are also worth noting:

So – take your pick from all the different and diverse street and fast food options – fast food doesn’t start and end with the burger and fries!